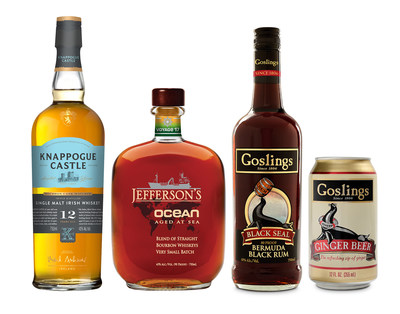 EBITDA, as adjusted, for the first quarter of fiscal 2020 was as compared to for the comparable prior-year period.

"The lower revenue in the first quarter was largely the result of the timing of shipments, particularly of . We expect that strong growth in the balance of fiscal 2020 of key brands, such as and Goslings Stormy Ginger Beer, will result in overall growth in revenue, gross profit, income from operations and EBITDA, as adjusted," stated , President and Chief Executive Officer of .

"The balance sheet recapitalization and expansion of our revolving credit facility with our lender in July was a major turning point for . It recognizes the value of our bourbon inventory, substantially lowers our overall interest expense, and provides significantly increased liquidity and financial flexibility," Mr. Lampen added.

"As an indication of growing popularity, our next voyage of Wheated Jefferson's Ocean Aged at Sea has been fully allocated while still at sea. We will use our aged bourbon reserves to support increased sales of and its more expensive brand extensions, such as Ocean Aged at Sea and wine finishes. We also continue to add innovative expressions to drive sales and enhance the Jefferson's brand. Our goal for fiscal 2020 is to sell 100,000 cases of , which is one of the top five selling premium small batch bourbons. Moreover, is the only leading small batch brand to command an average price greater than per bottle and the only leading small batch bourbon not owned by a major spirits company," said , Executive Vice President and Chief Operating Officer of .

"The growing popularity of ginger beer cocktails has been an important growth driver for Goslings Stormy Ginger Beer. It is now the best-selling premium ginger beer in America. The continued success of Goslings Stormy Ginger Beer gives us the opportunity to expand the line and add flavor extensions and other mixers, and to expand distribution and placements on retail shelves. Goslings is now entering its third year in the mixer section of all of the approximately 4,500 stores in and is a leader in that section," Mr. Glover added.

"In addition to continued sales growth and containment of expenses, we expect that three other factors will contribute to improved financial performance in fiscal 2020. First, our new debt structure should result in approximately in interest savings. Second, we expect to begin using our bourbon new-fill, which has matured, and which should substantially reduce our COGS and increase Jefferson's brand contribution. Third, we expect to benefit from reduced federal excise tax expense by over because of the recently enacted Craft Beverage Modernization and Tax Reform Act," stated , Senior Vice President and Chief Financial Officer.

Within the information above, provides information regarding EBITDA, as adjusted, which is not a recognized term under GAAP (Generally Accepted Accounting Principles) and does not purport to be an alternative to income (loss) from operations or net income (loss) as a measure of operating performance. Earnings before interest, taxes, depreciation and amortization, or EBITDA, adjusted for allowances for doubtful accounts and obsolete inventory, stock-based compensation expense, other expense (income), net, income from equity investment in non-consolidated affiliate, foreign exchange loss (gain) and net income attributable to noncontrolling interests is a key metric the Company uses in evaluating its financial performance on a consistent basis across various periods. EBITDA, as adjusted, is considered a non-GAAP financial measure as defined by Regulation G promulgated by the under the Securities Act of 1933, as amended. Due to the significance of non-cash and non-recurring items, EBITDA, as adjusted, enables the Company's Board of Directors and management to monitor and evaluate the business on a consistent basis. The Company uses EBITDA, as adjusted, as a primary measure, among others, to analyze and evaluate financial and strategic planning decisions regarding future operating investments and allocation of capital resources. The Company believes that EBITDA, as adjusted, eliminates items that are not indicative of its core operating performance or are based on management's estimates, such as allowance accounts, are due to changes in valuation, such as the effects of changes in foreign exchange, or do not involve a cash outlay, such as stock-based compensation expense. EBITDA, as adjusted, should be considered in addition to, rather than as a substitute for, income from operations, net income and cash flows from operating activities. A reconciliation of net loss attributable to common shareholders to EBITDA, as adjusted, is presented below.

This press release includes statements of our expectations, intentions, plans and beliefs that constitute "forward looking statements" within the meaning of Section 27A of the Securities Act of 1933 and Section 21E of the Securities Exchange Act of 1934 and are intended to come within the safe harbor protection provided by those sections. These statements, which involve risks and uncertainties, relate to the discussion of our business strategies and our expectations concerning future operations, margins, sales, new products and brands, potential joint ventures, potential acquisitions, expenses, profitability, liquidity and capital resources and to analyses and other information that are based on forecasts of future results and estimates of amounts not yet determinable. You can identify these and other forward-looking statements by the use of such words as "may," "will," "should," "expects," "intends," "plans," "anticipates," "believes," "thinks," "estimates," "seeks," "predicts," "could," "projects," "potential" and other similar terms and phrases, including references to assumptions. These forward looking statements are made based on expectations and beliefs concerning future events affecting us and are subject to uncertainties, risks and factors relating to our operations and business environments, all of which are difficult to predict and many of which are beyond our control, that could cause our actual results to differ materially from those matters expressed or implied by these forward looking statements. These risks include our history of losses and expectation of further losses, our ability to expand our operations in both new and existing markets, our ability to develop or acquire new brands, our relationships with distributors, the success of our marketing activities, the effect of competition in our industry and economic and political conditions generally, including the current economic environment and markets. More information about these and other factors are described under the caption "Risk Factors" in Annual Report on Form 10-K for the year ended and other reports we file with the . When considering these forward looking statements, you should keep in mind the cautionary statements in this press release and the reports we file with the . New risks and uncertainties arise from time to time, and we cannot predict those events or how they may affect us. We assume no obligation to update any forward looking statements after the date of this press release as a result of new information, future events or developments, except as required by the federal securities laws.